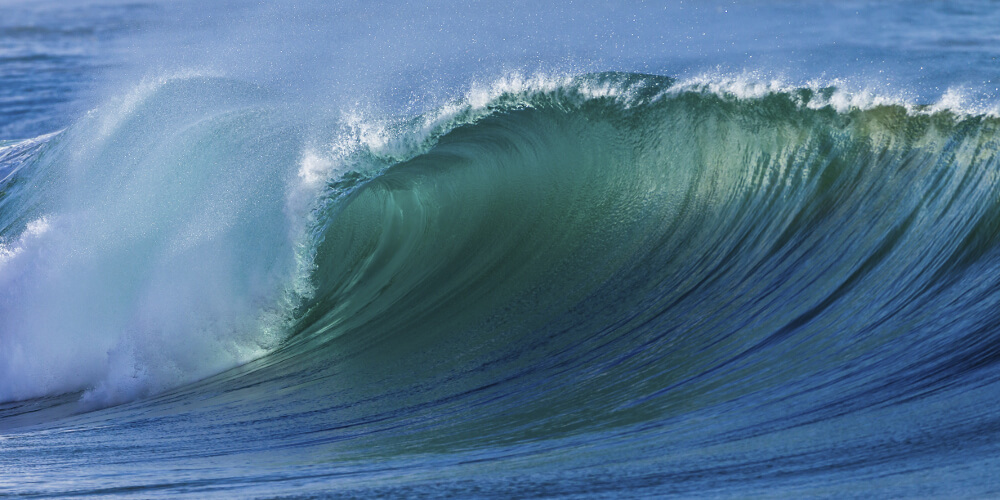 There’s plenty of power in the ocean’s waves, and for at least a couple of hundred years people have dreamt of harvesting it. Here’s a quick introduction to the what, how and why of wave power.

Compared to wind power and solar power, waves pack quite a punch.

At the Earth’s surface, bright sunshine delivers up to 1 kW of power per square metre. A good wind resource is in the range of 250-350 watts per square metre. Waves, on the other hand, can contain hundreds of kilowatts per metre of wave front, though that’s extreme. Waves lose energy as they approach the shore, and most developers are targeting locations where the average wave energy is around 30kW/m. That is still a heap of energy, meaning that smaller devices should be able to extract more energy from waves than much larger systems can extract from either wind or direct sunlight.

Another attraction of wave power is that it tends to be less variable and a bit more predictable than wind and solar power. The waves that crash upon the shore may have been generated by gales blowing thousands of kilometres away so they are less dependent on local conditions. Waves roll in day and night, and wave height tends to drop off gradually when the originating winds drop. The power from a solar panel, on the other hand, plummets when a cloud hides the sun.

If wave power can be made to work, Australia is a great place to take advantage of it. The thousands of kilometres of coastline between Perth and Hobart are exposed to some of the highest levels of wave energy on the planet. Sparsely populated and unsuitable as much of that coastline may be, there are still many good wave sites that are close to population centres and the electricity grid. 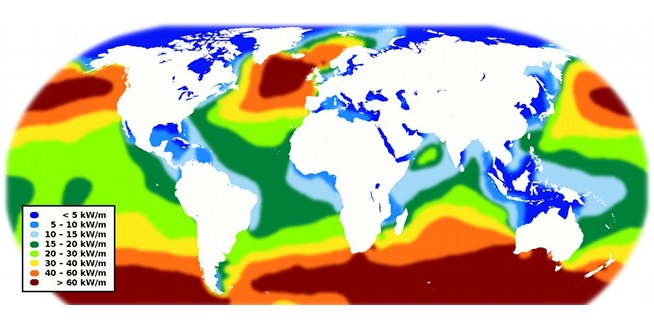 Southern Australia is a great place for developers of wave power. Image: Wikipedia

How many ways are there of tapping wave energy?

The short answer is “lots”. Wind turbines have long settled on their three-blade configuration, and photovoltaic panels all look pretty much the same. There are a couple of configurations for capturing solar thermal power, but in comparison the designers of wave energy converters (WECs) have come up with an amazing range of devices for generating electricity from waves. In Australia’s Marvellous Menagerie Of Wave Power Machines we provide a quick overview of local designs, and globally there are many more.

How can we compare different types of energy generation?

Comparing energy generators can be a bit confusing. There is a big difference between what a power station, of any type, can theoretically generate under ideal conditions, and what it generates in the real world. An important figure here is the capacity factor: how much electricity a power plant produces as a percentage of its theoretical continuous output.

A solar panel might be rated at 200W, but will spend half its life in the dark, some of its time under cloud, and a lot of time not directly facing the sun. Wind and waves vary in strength, and fossil fuel plants have down time for maintenance. Most wave companies expect capacity factors to fall in the range of 25% to 45%, a bit higher than solar and on a par with wind power.

The most important figure for energy generation is the levelised cost of energy (LCOE) – how much does it cost to generate each MW of electricity over the life of the power plant? Australian wave power companies offer figures ranging from $20-$120 per MWh and CSIRO estimate $100-$150 per MWh. In reality, we don’t really know what the cost of wave power will be yet.

Are there other benefits?

WECs, obviously, extract energy from waves. This can create other benefits such as protecting the shoreline from wave erosion, which potentially opens up another source of funds for suitable projects. Some types of WEC, oscillating water column devices for example, can be incorporated into breakwaters, and this also has the potential to add a revenue source or share costs.

Are there any negative aspects to wave power?

Locating significant infrastructure in a marine environment inevitably has consequences.

All types of WEC cause some level of disruption to the seabed, either from sitting on it or being anchored to it in some way. Power cables or pressurised water pipes need to be run across the seabed to the shore. Wave energy farms may create underwater “forests” of tethers, pistons and pumps.

There are also concerns of increased noise from turbines or pumps, and possibly the hum from high voltage power cables. There is the potential for leaks from devices that use hydraulic fluids. Then there is the problem of disposal of abandoned or wrecked systems.

How real some of these risks are remains to be seen. The shoreline is already a pretty noisy place, and wave power infrastructure may benefit wildlife. Seals often colonise buoys, oil platforms and navigational markers, and may find some WECs to their liking. Floating devices may also act as artificial reefs and attract fish.

Other risks are quite real. Australian company Oceanlinx went into administration leaving behind two large failed WECs. One is at Port Kembla in New South Wales and the other off Carrickalinga in South Australia. Both are creating significant headaches for the respective local governments.

Why is it taking so long?

In Wave Power: Are We Nearly There Yet? we looked at the main reasons why it is taking so long to commercialise wave power.

Also in this series