Inside Friends Of The Earth’s Yes 2 Renewables Campaign

Leigh Ewbank is the Campaign Coordinator for Friends of the Earth’s renewable energy campaign – Yes 2 Renewables (Y2R). Y2R partners with communities all over Victoria to win strategic battles that will speed-up the roll out of renewable energy. Interview by Lisa de Kleyn.

What is a typical day at Friends of the Earth (FoE)?

A typical day at FoE begins at home. It’s about getting up really early, jumping on social media, and putting on Radio National to see what’s going on – whether there are any key announcements relevant to renewables or climate that we need to be aware of. Once we hit the office, we respond to those developments.

We have well-defined campaigns and we are lean and mean at FoE. There’ll be between three and seven people in the office every day. It varies because the campaigners are always out on the ground, in the community. I’ll often be in a community that is exploring how to go 100% renewable.

So early on it’s media and social media, and once we’ve addressed that, we move into actions, events and community support.

What are some of Yes 2 Renewables achievements?

Y2R has had several achievements over the last two years.

We helped the King Island community respond to an anti-windfarm campaign. The debate came to a vote on whether or not to pursue a feasibility study for a wind farm, and the community returned a yes vote, which was the final verdict on that campaign. We’re linked to that outcome.

We helped a community in Trawool in Central Victoria respond to anti-windfarm activity in their region. Subsequently, the Cherry Tree Range Windfarm was approved by VCAT with visible community backing. Last year Y2R took the lead on the campaign to repeal the anti-windfarm laws in Victoria established by the former Liberal state government, and we’re really pleased that the new Premier Daniel Andrews has delivered on that commitment already. That will allow the Woodend community to follow in the footsteps of Hepburn Wind and build their own community project.

How would you define your approach?

It is strategic, considered and pragmatic.

We set campaign objectives, develop strategies to meet those objectives, and identify the multiple pathways that we can take to achieve them.

In collaborating, you need to be transparent and authentic. You can’t go into a community with a clichéd formulaic approach. It’s about being genuine.

We’re here to serve the community. That’s how we’ve managed to be effective and keep doing this for 40 years. 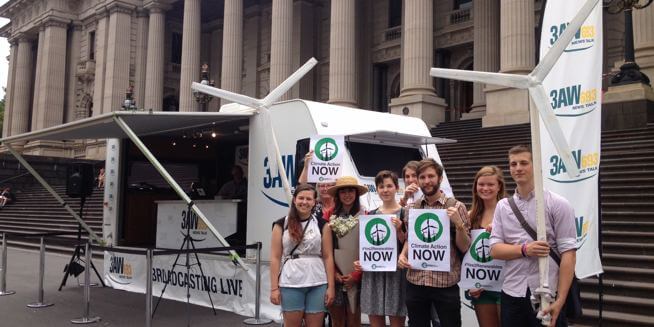 The Yes 2 Renewables team gather to drop in on Neil Mitchell and 3AW for a radio interview.

What actions do you take?

It’s always multi-staged, with a range of tactics. We do what’s effective depending on the issue at hand.

When we’re facing a new campaign and figuring out our strategy and what tactics we’re going to use, we evaluate those tactics. We’re not going to say – let’s just do a rally. Is a rally needed to win? Do we need a rally to achieve our objectives? We don’t discriminate against tactics, but we evaluate them and find what’s going to work.

As an example, in the lead up to the state election in 2014, Y2R held meetings with the Macedon Ranges Sustainability Group and we figured out that there was an alignment between their push for a community windfarm, which had been killed off by the Coalition’s anti-wind laws a few years ago, and the broader mission that Y2R has.

We embarked on a multiple month campaign that included: Have you ever encountered something that has taken you by surprise?

Nothing really surprises me. You observe the changing political landscape and you adjust and respond.

They have so much power. They have more power than they probably realise. When you get together with your community and you start to explore the issues and put heat on your politicians to actually deliver what you want, you’d be surprised with what can be achieved.

I’m absolutely committed to helping people realise how much power they have and to exercise that power.

What has been one of your most fulfilling moments?

A few weeks ago I arrived at work and someone from the FoE cafe came to me and said “I was talking to one of your volunteers the other day and she said that she’s never worked with someone who is so encouraging and empowering before, and that she feels like she’s making excellent contributions and having a great time”. When you get that feedback, that people are feeling empowered and supported and that they’re having an impact, that’s exactly what we want to do.

What’s the best thing about your job?

The Y2R team is full of such awesome passionate community members and it’s a bloody privilege to work with them.