Carnegie wants waves to go away

Carnegie Wave Energy’s MD Dr Michael Ottiviano provided an update on progress with the Perth Wave Energy Project (PWEP) and the development of their next generation CETO 6 wave energy converter.

The first of the three CETO 5 units that make up PWEP sits ready and waiting for deployment (above photo). All that’s needed is a few days of calm weather, as waves need to be less than 1.5m during installation. Dr Ottiviano noted that the calmest conditions at the Perth site occur in October and November, after winter storms decline and before Freemantle’s famous sea breeze kicks in. Fingers crossed it won’t be long before the world’s first multi-device, grid connected wave energy project is up and running.

Dr Ottiviano also provided further details of the development of the next generation, 1 MW CETO 6 system. Rather than the dual capabilities of CETO 5, which can produce both electricity and desalinated water, CETO 6 is a pure power generator. Sited much further from land, it is impractical to pump water to shore as occurs with CETO 5. On the other hand, with CETO 6, generators are housed within the buoyant actuator, making for easier maintenance.

While the larger unit should substantially cut the cost of power generation, the 3 MW CETO 6 project due for commissioning in 2016 has a budget of $46m. At over $15 per watt for the capital cost alone, that still leaves Carnegie with a very big gap to close to get close to the sub-$3 per watt installation costs of wind and solar power.

Another point of interest is that CETO 6 doesn’t spell the end of CETO 5. They have different applications, and Carnegie expects to sell both technologies to wave energy developers.

The All Energy Conference & Exhibition was on in Melbourne this week and it was interesting to see how it has changed since over the years. As I remember it, the first exhibition mostly comprised local solar power companies offering massively subsidised solar power systems to householders. Then the show went through a period of being dominated by Chinese solar panel and inverter manufacturers.

At this year’s exhibition it felt like the industry had matured. Solar still dominates, but there were more energy monitoring and energy efficiency consulting companies. Co-generation and tri-generation got a look-in too, putting a greater range of clean energy options on show. Wind, however, barely got a look in. 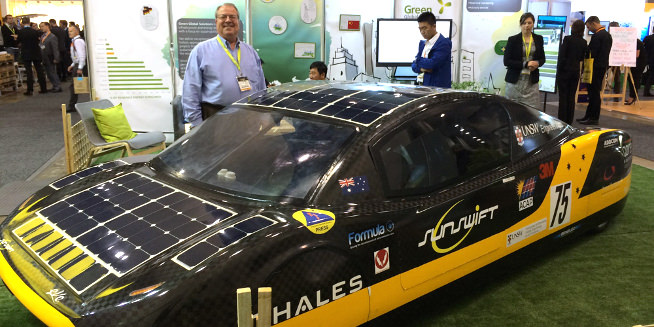 Gracing the Green Global stand was the Sunswift electric car. While built as a solar car its 16 kWh of battery storage gives it a range of around 800 km on a single charge. And it’s now slouch. The car recently set a new world record by traveling 500 km at over 100 km per hour on battery power alone. The car was built by a team of students at the University of New South Wales, and while they plan to have it compliant for road registration next year it probably won’t be appearing in a car showroom anytime soon. Still, it demonstrates what can be done, and should provide inspiration to the EV industry.