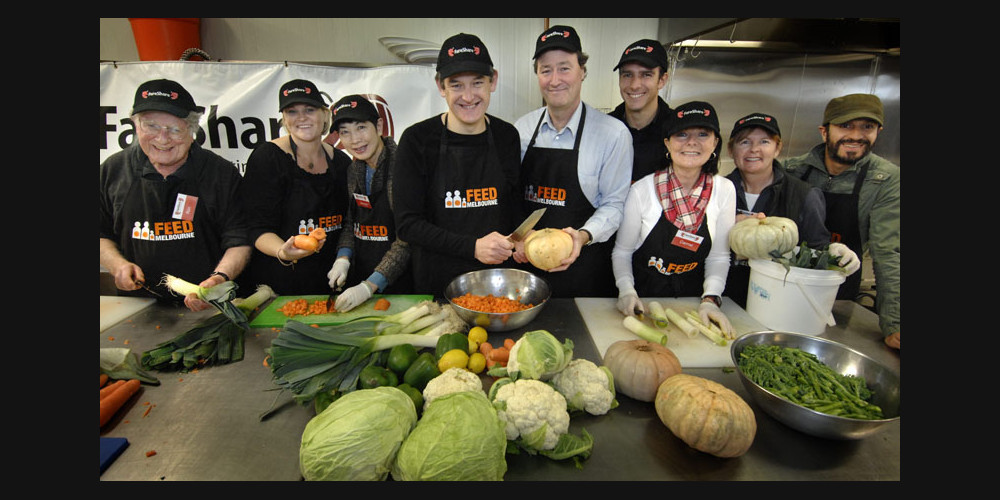 Each year, Victorians throw away enough food to stock the shelves of 28,000 supermarkets. “It’s around 700,000 tonnes of food,” says Marcus Godinho, CEO of FareShare. “For Australia as a whole, the figure is about 3 million tonnes.”

With the assistance of a small number of supermarkets, growers and food processing companies, FareShare manages to “rescue” some of that food and use it to create balanced meals for many Victorian families in need. Still, their efforts seem like a drop in the ocean. “We get through around 500 tonnes of food a year,” says Marcus. “We want to double that, to produce a million meals, which should be sufficient to meet the needs of Victorians who find it a struggle to cover their food bills.”

That still leaves a vast amount of food going to waste.

Not just the developed world

Australia isn’t alone in dumping huge amounts of food. Worldwide, it is estimated that a quarter to a third of all calories produced for human consumption go to waste. In some countries much of the wastage may be due to spoilage from poor storage conditions or a lack of transport infrastructure that prevents food being shipped to markets.

In more developed countries we want maximum choice regardless of season. Food retailers are compelled to keep dozens of varieties of bread in stock, with the impossibility of precisely predicting how many of each variety they can sell before it passes its use-by date. Use-by or best before dates are themselves part of the problem. Naturally, we want to be sure our food is safe to eat, but use-by dates see a plenty of food heading for the bin when is still perfectly all right.

A matter of balance

Achieving the right balance is another contributor to food wastage, one which even FareShare has to deal with. “We get a lot of some ingredients and very little of others,” says Marcus. “Recently some supermarkets have started to use discounting to more effectively reduce waste. That’s a good thing, but it does reduce the supply of some products to us.” One example of an ingredient in short supply is pastry, with FareShare’s shortfall being met by a donor who supplies fresh product. Although this reduces the proportion of rescued food in a given meal, it does allow a greater total amount of rescued food to be utilised.

Growing food that goes to waste comes with a significant environmental impact. It takes large amounts of energy, mostly from fossil sources, to grow, harvest, process and distribute the food we eat. We also expect to be able to eat what we want regardless of season. Asparagus from Peru, grapes from California, baby corn cobs from Thailand. In some cases the energy required to transport such food is many multiples of the energy it contains – hardly a recipe for sustainable consumption.

The potential savings from cutting out food waste apply to many resources. We could see savings of up to 30% on the use of agrichemicals, irrigation water, the land area used for agriculture and the fuel used in food production and transport. Reducing waste also improves the financial bottom line for the people who shoulder the bill for this waste – in some cases the farmers, but more so food retailers and consumers – the people who are close to the end of the supply chain.

On the other hand…

One person’s waste is another person’s income. The wide range of inputs that create the surplus food we discard benefit people early in the supply chain. Reductions in chemical use and land under cultivation also equate to fewer jobs and lower incomes.

Agriculture and the industries it supports constitute powerful lobbies and it’s difficult to imagine politicians promoting a policy of reduced food production. Given the large input of energy that goes into our food industry, much of it from oil, then looming oil shortages may curtail some of our wasteful ways. In the meantime, how about developing the means of spreading FareShare’s philosophy on a grand scale? It has been calculated that just a portion of the food wasted in developed countries would be sufficient to eliminate world hunger. Developing an effective means of distribution is surely within our capabilities. FareShare is about a fair share – not just for people, but for the planet as a whole.