Rick Heede of the Climate Accountability Institute spent eight years sifting through a mountain of data to come to the conclusion that 90 entities (investor-owned companies, state-owned companies and government –run industries) are responsible for 63% of all carbon and methane emissions that occurred between 1750 and 2010. Most of those entities still exist, and carbonmajor.org presents some informative infographics of who and how much.

New Scientist’s Fred Pearce goes so far as to suggest that this data could help individuals take legal action against energy firms for the harm caused by extreme weather events. He says that nations hit by such climatic events may already have a case against wealthy nations for failing to honour commitments made at the Rio Earth Summit in 1992.

It’s an interesting prospect. And, if it was a case of these energy companies maliciously burning fossil fuels with the primary aim of increasing atmospheric CO2 levels, they might be fair game. At a more realistic level, many of these companies stand accused of using their money and influence to block effective action on climate change. That creates a more compelling argument for setting the lawyers on to them.

…this rather overlooks the real offenders. The millions of us who happily guzzle our way through ridiculous amounts of energy driving our single-occupant SUVs on overcrowded roads, heating and air conditioning empty rooms in our houses and buying mountains of energy-intensive goods that we don’t really need and often don’t even use. Is the pushmepullyou world of consumerism driven more by companies pushing their product, or by the pull through of consumers who want it all now?

Apportioning blame isn’t so easy. Neither is changing the behaviour of the billions of consumers accustomed to instant gratification.

Maybe dragging oil and coal companies into court for their crimes against the climate might be a good idea. Redirecting their efforts and talents to the quest for clean energy and a stable climate might be a better one. At present there isn’t much sign of that happening. 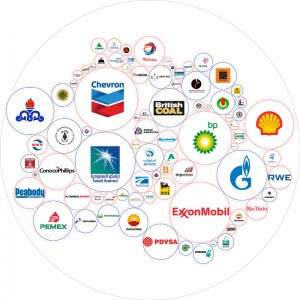