Designing The Right Solar Power System For Your Business Installation of solar power systems on commercial buildings is going mainstream. In July 2014, 20% of the solar rebates paid in Australia were for commercial-scale installations, mostly in the 30-100kW range.

There are several, interrelated factors driving the uptake of solar power by businesses, rising electricity prices and the falling cost of solar power amongst them. Depending on location and power prices, commercial solar power systems are offering payback times of between three and seven years. After that, it’s free power from the sun!

Meanwhile feed-in tariffs, the amount paid by electricity companies for the electricity that solar power systems export to the grid, have been slashed. Low feed-in tariffs mean you are better off using your power than exporting it, and businesses are generally better placed to do this than households.

But before installing your solar power system there are a few things to consider.

The cheapest kilowatt-hours are the ones you don’t need to buy in the first place, so it makes sense to improve the energy efficiency of your operation before slapping on the solar panels.

This can include checking power quality and regulation, the efficiency of air conditioning and heating systems, and the cheapest of all, good old fashioned behaviour change.

Once the practical energy-saving measures have been implemented, it’s time to look closely at the business itself.

Very few businesses can offset their total energy usage through solar generation alone, but it is possible to offset up to 80-90% of business hours usage through the right design methodology. A key step is creating a profile of the businesses power usage, a consumption curve. The aim is to then fit solar production within the consumption curve, to maximise self-use (which might be worth 25-40 cents per kWh) and minimise power export (which may be worth just 8 cents per kWh, or nothing at all).

Ideally, constructing the power profile of the business will be done by looking at the hour by hour power consumption over a 12 or 24 month period. Failing this, monthly electricity bills, an analysis of how a business uses power through the working day, and taking into account any energy efficiency improvements that have been made should provide enough information on which to design an appropriate system.

The following chart shows a good match between solar (PV) output and business usage on a working day: 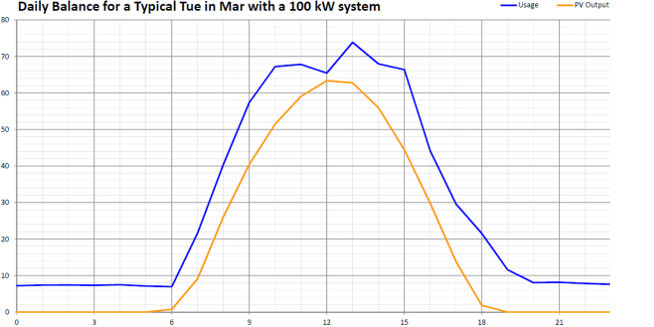 In this situation, all power is consumed on site. None is exported to the electricity grid.

A good match between production and usage from Monday to Friday is one thing, but what happens at the weekend? The situation may look more like this: On weekends, nearly all the solar power produced by a system may be exported to the grid.

Imagine this taking place across a large industrial estate with many solar power systems. The surge in weekend solar export to the grid could potentially cause voltage rise and damage to transformers and sub-stations. Power network operators are understandably concerned about this. In Queensland this has led to some solar power systems being denied connection to the grid, ruling out any possibility of exporting power.

With appropriate hardware to control power export this problem can be overcome and connection will likely be allowed. However, this is a critical factor in the decision to install solar power, and should form the first step in the planning process.

A likely solution to grid stability and feed-in problems lies with the uptake of large-scale battery storage. Cost is still an issue here, though for businesses facing frequent blackouts it can be worthwhile. Storage is the hot topic in renewable energy at the moment. Battery prices are expected to fall significantly in the next few years, so watch this space.

Most commercial buildings less than 30 years old will have roofs capable of taking solar panels. The distributed load is usually well within the allowances of most structures, provided the right mounting system and structural interfaces are used.

Wind loading is also a consideration. Australian Standard AS1170 ensures live and dead load calculations are region specific to account for fluctuations in severe wind patterns in different areas. This guides the level of structural interface that is required to be compliant and therefore eligible for the rebate.

All new commercial buildings should be designed with solar power in mind, even if it isn’t included right from the start. In addition to the structural issues mentioned above, this may mean ensuring there is an inverter area and installing pre-cabling from the roof to it. Shading, roof structure and roof access are other factors to for building designers to consider.

There are thousands of hectares of large, sunny roofs spread across Australia, on buildings that are already connected to the electricity grid. Regardless of views on climate change, the business case for solar, with its short payback times, is becoming increasingly compelling. There is little doubt that an increasing number of those roofs will be turned into solar power stations in the not too distant future. 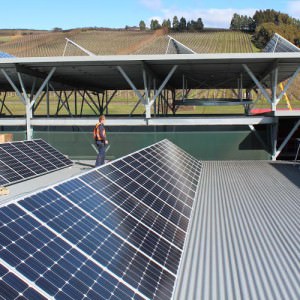 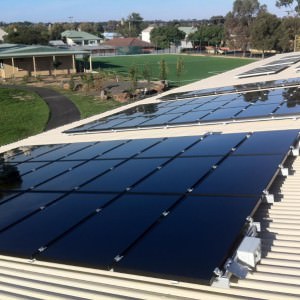