Brothers and mechanical engineers Glen and Shawn Ryan have been working on their Bombora Wave Energy Converter (WEC) for over five years.

The Bombora system is an air circuit housed under a flexible membrane that converts ocean swell into useful electricity. It is fully submerged and located on the seabed in near-shore waters 5 – 15m deep. It operates like a series of foot pumps, pressurising air under the membrane into a common manifold system to drive a turbine and generator. As waves pass over the system, individual diaphragm cells are compressed by the high pressure in areas under the wave peak and expand into the lower pressure areas below the wave trough. These high and low pressures provide a pressure differential causing air to flow around the closed loop circuit. Check valves between the diaphragm cells and the manifolds cause air to always flow in one direction, regulating it from a pulsing wave to a smooth and consistent flow, allowing an efficient turbine design.

Wave tank testing of an initial prototype has been completed, and seed funding has been secured to undertake a small scale field trial. Bombora aims for this to be underway at a site within Perth’s Swan River in 2014.  Bombora is also intensifying its R&D effort with computer modelling work being performed by Dr Matt Folley, an experienced wave energy converter expert from Queens University in Belfast and Dr Andrew King at Curtin University. Certified tank testing is being managed by Drs Irene Penesis and Gregor McFarlane at the Australian Maritime College. From there the plan is to deploy a 1.5MW commercial demonstration pilot plant comprising a single unit at one of a number of prospective Australian sites by 2018. The company is also assessing other sites in Scotland, Ireland and Mauritius.

Shawn says that, being a simple system, none of the technical challenges have been insurmountable. Raising capital, however, has required Glen and Shawn to “open up our peripheral vision about how we plan to commercialise the technology and review our routes to market”. This includes producing variants of its system for use in markets as diverse as marina and harbour wake and wave attenuation, shoreline protection, marine biodiversity and habitat enhancement, aquaculture and tourism. These derivatives of the main product should help to lower development costs and provide earlier revenue opportunities. Shawn indicated “It’s really our key point of difference to the alternatives in the market. We aim to be generating revenue well before we have a full scale unit in the ocean generating electricity.  Were in the sustainability industry, but to survive and prosper we have had to develop sustainable business models.”

“Due to the emerging nature of the marine energy industry there has been very little real data available of the true cost of energy at scale,” says Shawn. In any case, it depends on the wave resource. “We may install a 2-3MW rated generator for heavy seas like those at Albany in Western Australia to capture more of the energy in large storm events that occur over a small time window, whereas in the lighter but generally more consistent seas, such as in the equatorial zone, we might only install a 0.5MW rated generator in the same sized system and still produce the same amount of power.” It all comes down to the specific conditions at each site.

However Shawn believes that, with its relatively low maintenance design and low materials cost, the Bombora WEC will achieve a low cost of energy production.

The current political climate could be better though. “We really need political and financial leadership and support in Australia for new energies,” Shawn says, “we see electricity becoming another major growth commodity which can be exported around the world from this resource endowed country as the old energies make way for new.”

Update September 2014:  Bombora Wave Power received a permit and provisional license to conduct trials of their WEC at Como jetty in Perth’s Swan River. Shawn says: “People find it hard to appreciate the varied opportunities Bombora presents without being able to ‘kick the tires’. Field trials will validate the design features and robustness of key components and provide that level of assurance.” 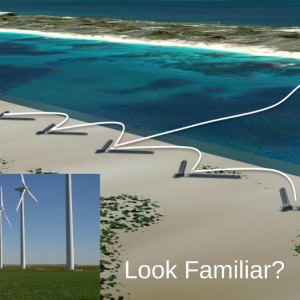 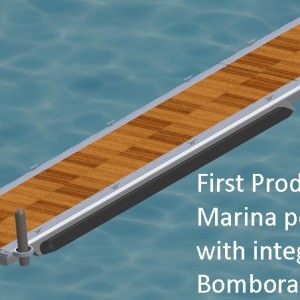