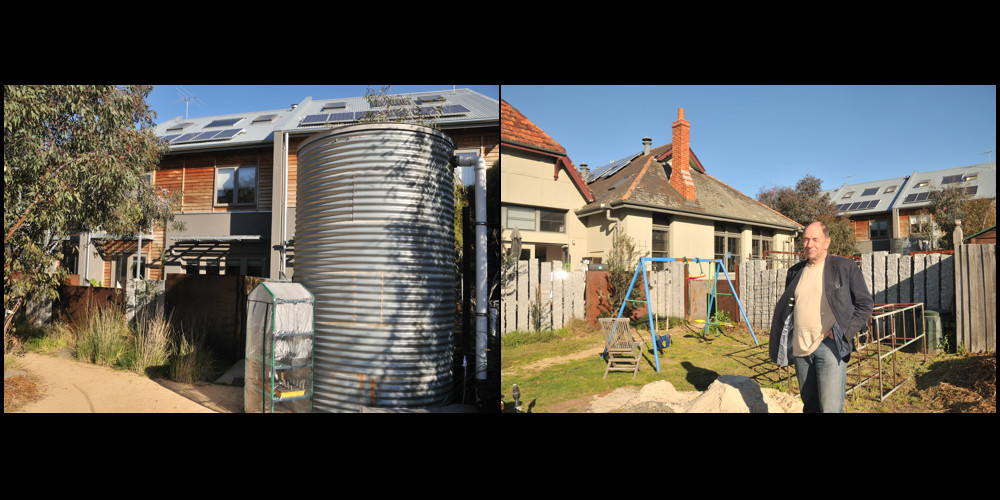 It will take a book to do justice to the story of the WestWyck eco-village development, though it’s a book that will need to wait a bit. The story isn’t over yet. Stage one of the transformation of the former West Brunswick Primary School is completed and fully occupied, now plans are being drawn up for stage two.

Lorna Pitt and Mike Hill don’t seem like your typical property developers and it’s a path they very nearly didn’t go down at all. “We were part of the consortium of five people that purchased the old West Brunswick Primary School in 1993,” explains Mike. “Our initial plans were to stop the building from being demolished and to develop it into a performance venue and conference centre.” It failed to generate sufficient income to cover costs, and in 1998 three of the five owners decided to terminate their involvement in the project.

Lorna and Mike very nearly joined them, but with a vision for an eco-village burning brightly in their minds they instead became the sole owners.

“It was daunting,” says Mike, “but we were inspired by what could be done. We wanted to show that you don’t need to pull everything down.”

Mike sold his house, Lorna mortgaged hers and with some help from the bank they were able to develop seven apartments within the old school building. The funds from these then allowed five new townhouses to be built on the southern street front.

The key sustainability principles guiding the development are materials efficiency, energy efficiency and water efficiency. Reused and recycled materials are used where possible and landfill is minimised. Rainwater is collected, and both grey and black water are treated on site. The new townhouses are rated at 8.5 stars for energy efficiency, and all the buildings sport solar power and solar hot water panels.

The development seeks to foster social, as well as environmental, improvements. Key to developing a ‘village’ concept is the incorporation of shared, communal spaces.

…the problems  and compromises….

“The council has been fantastic,” says Mike. “The bank was a bit harder to win over, and the marketing consultants had different ideas on how to cater for cars.”

There is pressure on developers to bring cars into the living environment rather than park them in less protected positions that don’t compromise design and sustainability objectives.

A shared eating area and shared laundry were dropped from the original plan, but the marketing team and the bank accepted that WestWyck was relegating the car to a less significant location. An uncovered car park on the southern boundary provides resident parking and leaves more of the site available for gardens and other uses.

Lorna notes that there weren’t any blueprints for this type of development. “A lot of things happened interactively and we had to respond to problems as they arose.” The black water treatment system was a case in point. In it’s original form it wasn’t suited to an urban situation and the available land area unable to handle the volume of water it generated. “Yarra Valley Water were helpful, and with the involvement of CSIRO we got it sorted out,” adds Lorna. “It wasn’t the only thing that required modification, and changes always take things over budget.”

Lorna now thinks that some of the problems became assets. “The slow development was partly due to the bank,” she says, “but taking things slowly improved the final result. We had great interactions with the builder and the original architects, and the bank’s attitude changed as they saw the results.”

One result was that some of the townhouses sold for prices above their expectations. They now have higher valuations than similar but less sustainable properties in the area. “We now have a great relationship with our bank manager,” says Mike. “He’s now convinced that there is a demand for this style of development, at least in this area, and the bank will provide full funding to allow stage two to be done in one go.” That funding is subject to pre-sales of 85% of units, so most will need to be sold off the plan.

With a total of 18 apartments and townhouses, stage two is bigger than stage one. Even so, Mike and Lorna feel that they are now past the half way point. “We’ve learnt most of the hard lessons,” says Lorna, “and we have a much better idea of what we are doing.”

That means less compromises this time around. “We plan on including overnight stay rooms, common eating areas and more communal spaces,” she says.

All this hard-won knowledge isn’t being kept to themselves. Lorna and Mike are consultants to a number of other eco-developments.

The power of two

From the early days of camping in cold classrooms, Mike and Lorna now occupy a cozy apartment with soaring ceilings, a big kitchen and an enormous dining table that speaks of their desire to share. “There were times when one or other of us felt like giving up,’” says Lorna, “but being in this together means one is able to lift the other.”

And years of sleepless nights have paid off, at least in some ways. “For the last two years we’ve been very proud of what we’ve achieved,” says Mike. “We’ll decide whether or not WestWyck was a commercial success when Stage Two is completed, but in the meantime the project has both national and international influence. We speak at industry conferences, we have articles written about us, we win awards and we deal with hordes of visitors. More importantly, the 39 people who currently live at WestWyck all know each other.”

With stage one completed, the shared dream of creating an eco-community has been achieved. Stage two is making its way through the planning process, and with growing awareness of the benefits of this type of development, WestWyck’s influence will surely grow.