Can Green Slime Save The ICE? 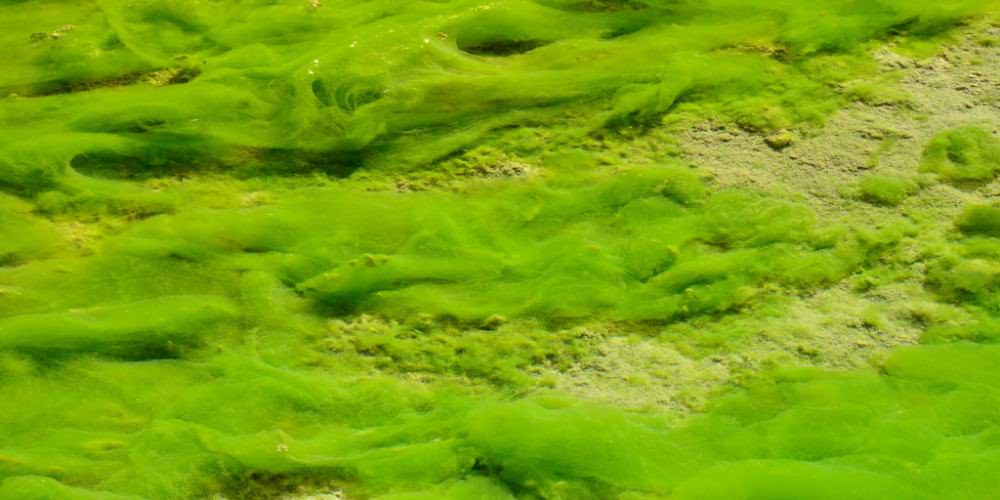 In a bit over 100 years the internal combustion engine (ICE) has truly transformed the world. Cheap engines powered by cheap, energy-dense liquid fossil fuels are the mainstay of both transport and food production, and it’s difficult to imagine a world without them. But with the transport sector alone responsible for around 13% of greenhouse gas emissions and fossil fuels a finite resource, the ICE is ripe for replacement by a cleaner, more sustainable alternative.

It’s already happening, of course. The search for sustainable motoring solutions ranges from backyard bio-diesel through ethanol to battery-electric vehicles and the newest kid on the block, hydrogen fuel cell vehicles. And there are hybrid solutions. The Toyota Prius has been a fuel-efficiency pinup for years, and diesel-electric hybrids hold out the promise of marrying hybrid efficiency with biofuel. So which technology is going to win out?

A vote for volts

Not too long ago I would have picked electricity as the ‘fuel’ of the future. Why? Because solar panels are simply better at turning sunlight into energy than plants are. Biodiesel and ethanol might feel at home passing through our existing liquid fuel infrastructure, but an increasing number of electric vehicle (EV) owners are charging up their cars from panels mounted on their roof tops. No competition with food crops, no transporting the fuel, refining it and distributing it. Just plug in to the sun. Electric motors are also more efficient at turning the energy stored in batteries into clicks on the odometer than ICEs are. Even without taxes on liquid fuels or subsidies on solar power, the fuel cost for EVs is significantly less than for ICEs. 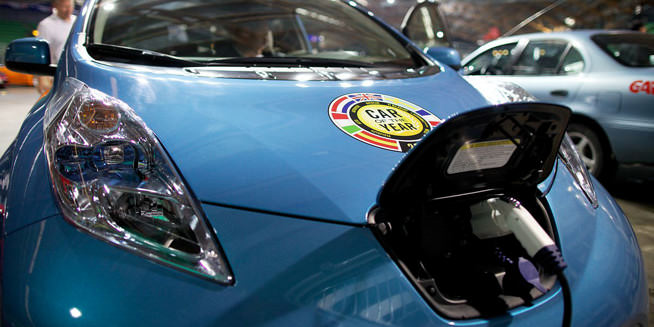 Will EVs be the death of ICEs? | Image: Zero Emission Resource Organisation via Wikipedia (CC)

There are a couple of drawbacks to EVs: the cost of batteries and the time to recharge them. But for most people using EVs for daily commuting, recharging time isn’t an issue. And as battery manufacturers seek the economies of scale already enjoyed by solar panels, it’s a fair bet that battery prices will decrease significantly within a few years. As for hydrogen fuel cell vehicles (HFCVs), they are also EVs, just with a different storage medium. Hydrogen may not share some of the problems of batteries, but it is very early days for HFCVs and they have their own issues to work through.

Now my EV utopia looks a bit less certain, and it’s all thanks to green slime. Microalgae to be precise. South Australian company Muradel believes it can produce up to 60,000 litres of ‘green crude oil’ per hectare per year (pdf) from algae, plant biomass and organic waste. That’s more than ten times the yield per hectare achieved by ethanol and biodiesel made from sugar cane and oil palm (pdf).

Importantly, the algae grow in salt water in ponds that can be constructed on marginal land unsuited to food production. And Muradel isn’t the only company claiming big things from its tiny workers; US company Algenol quotes a fuel yield of over 70,000 litres per hectare per year from its microalgae. 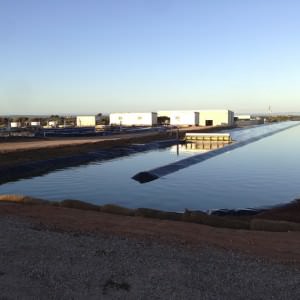 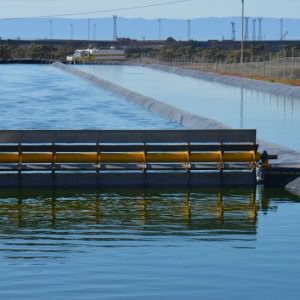 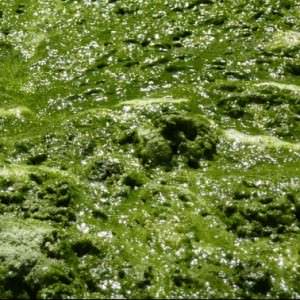 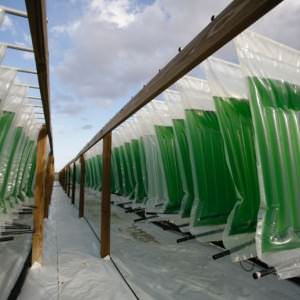 Algenol’s fuel is mostly in the form of ethanol, whereas Muradel’s green crude is chemically similar to fossil crude oil. On fractionation it yields petrol, diesel and jet fuel, so not only does it plug straight into current oil refinery infrastructure, it produces exactly the same fuels that the majority of today’s vehicles run on. Is this the transport fuels game changer that it appears to be?

“Potentially,” says Muradel’s Business Development Manager, Andrew Milligan. “Microalgae to fuels used to be about biodiesel production from the vegetable oil extracted from the algae cells, but the economics didn’t stack up. Muradel is now using an energy-efficient process to convert the total microalgal biomass to hydrocarbons. Our conversion technology is also feedstock-flexible, and the business case for producing fuels from industrial by-products, which can be available at scale and at no cost, is very strong.”

Provided the technology scales up successfully, that leaves cost as a possible stumbling block. Andrew says that they will need to run their demonstration plant for 12 months, to work out annual operating costs that take account of the seasons and to prove the robustness of the technology. “We’re in the process of costing the construction of a full-scale commercial plant,” he adds. “Ultimately, at commercial scale, we think we’ll be able to produce green fuels at cost parity with fossil fuels.”

Algenol claims production costs of US$1.27 per gallon of fuel, or around A$0.32 per litre. Even if crude oil falls to US$60 per barrel, that equates to around A$0.60 per litre. If Muradel can beat that, the future of our fuel supply becomes very interesting.

Greenhouse gasses aren’t the only problem associated with fossil fuels. Both petrol and diesel vehicles are sources of air pollution. The danger posed by particulate emissions sees France aiming to phase out diesel engines in private cars, and the fumes from petrol engines afflict many a crowded city.

I’m not writing off EVs just yet. They have a lot going for them. But the days of the ICE may now not be quite so numbered. And with every country that has access to suitable land, salt water and sunshine a potential Saudi Arabia, the geopolitical implications of algal fuels are also something to contemplate.