A More Natural Approach To Death. An Interview With Libby Moloney Of Natural Grace. 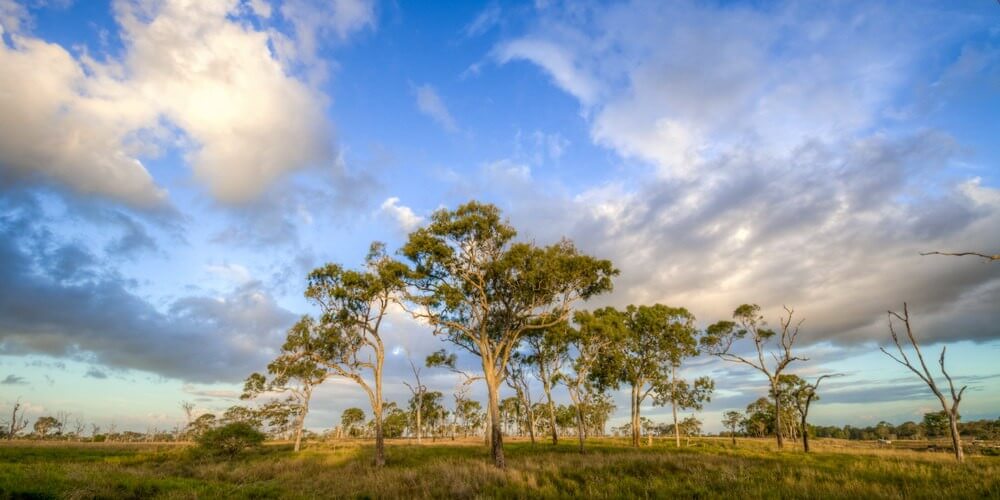 Since 2012, Libby Moloney has been developing more holistic, natural and sustainable choices for near death and after death care. She talks to Lisa de Kleyn about creating options and changing minds in the Australian funeral industry.

What attracted you to start a funeral company?

I was an accountant for almost 20 years. Halfway through this period, I started to re-dream a new career. I had no idea what it was except that I knew that it was about serving others.

One day I was with a family and the mother was dying. She’d been beautifully cared for at home by her daughter-in-law, but her pain was becoming difficult and the family was unclear about how close she was to death. They panicked. All of a sudden she’s in an ambulance and on her way to hospital. She died within an hour of arrival, out of her home, out of her context. It was an understandable panic reaction from the family, and it was at this time I thought ‘this can be better’, and that began a pursuit of knowledge.

I read everything I could about death care for 10 years. I tapped into the UK and US experience as they are much further ahead than we are. What I learnt was that there was this huge gap in terms of what was available overseas compared to Australia, and no one was bringing it all together into one offering – home-based death care, natural death care and real choices of sustainable products like coffins.

So that’s where Natural Grace was born, out of a practical response to a deeply human issue.

Where does your interest in sustainability derive from?

I was raised in the country where you are environmentally responsible by nature. We never claimed to be sustainable or green, but we never hurt anything, we didn’t waste anything, and we never cut anything down that didn’t need to be cut down. That’s the foundation of Natural Grace too, we don’t have a “green option”, we are sustainable by nature. That’s just what we do.

When people come to you, what are they looking for?

People have a sense that there are natural options but they don’t realise the extent of what they can have.

Two sisters visited one day and they were planning, getting their affairs in order, and they were energetic, loud and very funny. They were saying “what we want is to be put in a shroud and buried under a tree, well I want to be buried under a tree and she wants to be buried with a tree on top of her”. I said “OK, good, here you go”. They said “no that’s what we want; we know we can’t have it, but that’s what we want”.

They can have it. There is a lack of awareness about what’s possible. In their defence, no one has ever told them, because it’s not commercially viable to tell them, and there’s no one responsible for telling people what’s available, so we’ve started the Natural Death Advocacy Network to address this.

What are the key steps in creating a sustainable funeral?

Essentially, there are four aspects to a funeral.

First there’s our care and the service that we provide, and we offset everything we do.

Next is the coffin choice. We only stock and display coffins that fit within our value system including cardboard coffins, shrouds, and sustainably sourced timber coffins, but we will access anything that people want, as their needs are paramount. In all of our experience, we’ve only purchased two that we didn’t stock. People have come to accept that an expensive, shiny coffin isn’t a symbol of love. A coffin is designed to keep a body safe, and what people really want is a simple coffin that they make beautiful by decorating, drawing or writing on it. The most exciting coffins are the ones we leave with the family, and when we return to pick them up, they’re this spectacular display of creativity and love and they’ve done it all by themselves.

Finally, there is everything else; newspaper notices, flowers, venue hire, catering and the ceremony itself. This is where the creativity comes in – how do we have the symbols of ritual and ceremony without the impact? People can use flowers from their own gardens; online notices; and community catering.

Food is a huge part of the ceremony and it can have so many benefits, particularly when the community is feeding themselves. There are obvious environmental benefits of home cooked food including less packaging because everyone brings their food on a plate. Most importantly, it honours that everybody in the community has something to bring.

You can’t underestimate how much people want to help but there’s very little they can do other than be respectful and honour people and rituals. So bringing food meets our need to help, creates a wonderful array of choices and delights and is great conversation starter. It provides a sense of connection. This is where sustainability and humanity are one and the same.

Can you describe a recent funeral to illustrate the options?

John (not his real name) died suddenly. He was a true environmentalist. He didn’t know how to be anything else. So his family knew instinctively that they wanted a natural funeral but they didn’t realise the extent of the options available.

They had already chosen to have his body cremated, and we were able to offer natural shrouded cremation.

The family had these old checked sheets that his children related to, as they belonged on the beds of their grandfather’s house. So we took these beautiful checked sheets from the cupboard, wrapped his body in them, and then put him into a simple shroud bearer with a solid base, and his body was cremated with the sheets and simple panel of timber.

We designed a ceremony around: bring your hat and your chair, and sit in John’s paddock.

It started with a ‘bringing him home’ ceremony. The family brought his hat, a whole lot of leaves in hand, his ashes in a box and a photo, and they placed them in the paddock, effectively creating an altar. People told stories and played music. He’d been an active member of the CFA so at the end of the ceremony, John was taken from the altar through a Guard of Honour and the final ceremony was held at the CFA Recreational Centre.

The community self-catered and there weren’t any purchased flowers, there were only the leaves and flowers from the gardens of their friends. The ashes were in a timber box, which they’ll keep. Death care had been warm water and essential oils. The family did one notice in the paper. That was it.

The ceremony was John, in John’s home, in his own place.

How does natural death care fit into the Australian culture?

It was categorically clear from my research, that a huge section of our community has said “put me in a box and plant me under a tree. Don’t make all that fuss, don’t do things to me, and don’t buy some stupid, fancy $4,000 box”. They want a practical, sustainable, ‘thanks for coming’, service. For others, they want an ornate coffin, plus all of the spiritual rituals.

The US is the leader in natural burial grounds, which is the practice of burying a body, in a natural state to encourage decomposition, in a conserved environment. In its purest form, the graves are not marked but this doesn’t work in the Australian context.

We’ve had families that chose not to be buried in the natural section at Healesville so that they could have their grave marked. Everything else was natural. They had a wicker basket and the body was free of chemicals and in cotton clothes. But they chose the headstone section so they could mark the grave. Genealogy matters.

Ultimately, the individual needs of the family are paramount. Our approach is to apply a gentle, practical, down-to-earth response to people’s needs, this requires creativity and then it creates choice, which seems to be really resonating with people. 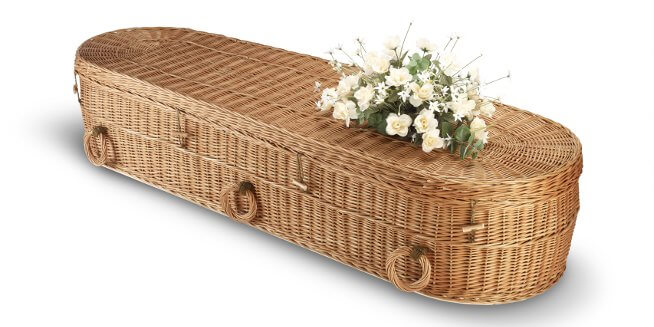 Wicker may be a more environmentally-friendly alternative | Image: Shutterstock

You’ve instigated and created some of these options, such as shrouded cremation and a natural burial site. How did you make these changes happen?

We took the notion of shrouded cremation to Graham Fountain, CEO of Remembrance Parks Central Victoria, which is the Bendigo Crematorium

I rang Graham and asked “why can’t I wrap this woman in a shroud and bring her to you to cremate?” He told me that they don’t do that and nobody does. Then 24 hours later he rang me and said “your question has kept me up for 24 hours and I’ve read everything there is and you’re right, there isn’t any reason that we can’t do it”.

For me, it’s just about being a bit stubborn and being prepared to ask “why not?” The people in my life who love me would say that I have a certain amount of sheer determination. Give me a good reason why not, and I might accept it, otherwise I’ll just keep hunting until I find what I need.

However, at an average age of 75, none of the Trustees has done it before, and they’re volunteers. Why should they go out of their comfort zone? Everybody else says “we’re not doing it, it’s not our thing”, so the Trustees have shown extraordinary leadership. Now, because Carlsruhe has done it, others will have a look at it, but nobody wanted to be first.

Related: The Environmental Impact Of Death And Decay

It’s alright for me as a much younger, confident individual, to say “let’s do all of this stuff”. For example we’re now the only Australian distributor of a properly constructed, weight-bearing, reliable, safe and insured shroud. But they have to overcome their personal discomfort. So they’re my heroes at the moment.

What does Natural Grace offer that differs from the rest of the industry?

The relationship continues into post death care by way of continued contact with our families to check how they are faring and we hold an annual Memorial Service which is very moving and our families tell us, very helpful in terms of the living returning to a new “normal” in their lives.

People often ask, “What’s so natural about it?” It’s easy to say that we don’t embalm bodies, we provide sustainable coffins, we only provide natural death care, we have a chemical free site and we offset our services. But it’s also about creativity and what we don’t do.

It’s about really listening to the family’s story and hearing what is actually being said, or what they’re trying to find the words for, and then using our experience and creative natures to design moving, meaningful ceremonies that reflect their needs and honour a person’s life rather than do what’s easy for us.

It’s saying that if you don’t have masses of flowers, with wired up stems in foam that all go to landfill, what else can you have? Because it’s not about saying don’t do it. You still need these symbols in ceremony. We just need to find a way with less environmental impact.