Bill Ellul’s rotary heat exchangers could be one of the best kept secrets in the field of building energy efficiency. It isn’t that he intends to be secretive, but word of mouth alone creates more than enough demand to keep his business busy, and most of that comes from his home state of Victoria.

Why is there so much demand on his doorstep? Because with an efficiency of over 90%, his heat exchangers are very, very good at recovering the energy that goes into heating or cooling buildings while allowing for effective ventilation.  And with a lifespan that can exceed that of some of the buildings they are installed in, these heat exchangers provide a big financial payoff too.

Breathe in, breathe out

A good supply of fresh air is critical to the health and productivity of the occupants of any building, but heating or cooling this fresh air puts a huge load on air conditioning systems. A rotary heat exchanger, or “heat wheel”, transfers most of the heat or “coolth” (yep, it is a real word) contained in the exhaust air to the fresh air, massively reducing heating and cooling costs.

Heat wheels are the conceptually simple but remarkably clever invention of prolific Swedish inventor Carl Munters. They comprise a wheel (obviously) filled with a porous matrix, usually a honeycomb of a metal such as aluminium. Separate air ducts blow exhaust air from the building through one half of the wheel and fresh air, in the opposite direction, over the other half, as shown in the following diagram. As the wheel rotates, the matrix is either warmed or cooled to close to the same temperature as the exhaust air. The matrix then moves through the incoming airstream, warming or cooling it back towards the temperature of the internal air.

This means that most of the energy needed to heat or cool the outgoing air is transferred to the incoming air. It takes energy to turn the wheel, but only around 200W, and for this small energy input a far greater amount of heat energy is recovered.

In response to the oil embargo in 1967 the CSIRO and Monash University started working together on energy efficiency, with heat exchangers one of their targets. In work that generated about a dozen PhDs, the technology was significantly improved and brought to market by Rotary Heat Exchangers Pty Ltd (RHE), the company Bill now owns. It remains, says Bill, world-leading technology.

The secret ingredient is Mylar, a very thin version of the plastic used to make soft drink bottles. In RHE’s heat wheels this makes up the heat exchange matrix. Mylar just 0.076 mm thick and 100 mm wide is wound onto the wheel in a continuous strip with a spacing of 1 mm between each layer. It can take 10-11 km of Mylar to make a three metre diameter wheel!

There are several benefits that set RHE’s heat exchangers apart, says Bill. The high efficiency we’ve already mentioned, which means that fresh air coming into a building is very close to the temperature of the air going out. With a wheel width of just 100 mm, air passes through easily. There is only a small drop in air pressure across the wheel. Metal honeycomb heat wheels are between 250 and 400 mm wide, and more energy is required to push air through them and to rotate them.

RHE’s heat exchangers are also self-cleaning. Mylar presents a smooth surface, and any dust trapped during the first half of the cycle gets blown off when the air flow reverses during the second half of the cycle. And if need be, the Mylar is easily cleaned with a hose.

The durability of RHE’s product is illustrated by the recent rebuild of the Box Hill Aqualink leisure centre in Melbourne. Two RHE wheels had serviced the old centre for 33 years, recovering heat from the corrosive air from the swimming pool hall. After a clean and a coat of paint they were reinstalled in the new centre, along with three new heat wheels. Given that even a new wheel can achieve a payback period of less than one year, that’s a pretty impressive return on investment. Bill estimates that at another aquatic centre, in Cranbourne, his four heat wheels are saving over $100,000 on the gas bill and reducing carbon dioxide emissions by more than 680 tonnes each year.

RHE was established in 1968, and Bill bought the business 17 years ago. “I was consulting to industry on energy efficiency,” he says, “but when support for energy auditing consultants was removed by the Howard government, I looked for manufacturing opportunities.”

He was already well acquainted with the RHE. Not only had he been involved with the development work done by the CSIRO and Monash, Bill’s consulting firm, Ecopower, had collaborated with RHE in developing a high temperature heat wheel. However, the 1990s were a period of low energy costs, demand for RHE’s product was relatively low and the company took to building electric disability scooters as an additional product stream.

Now, with increasing awareness of climate change and the building industry keen to go green, the situation has changed dramatically. “The potential for improving the energy performance of existing buildings is huge and we’ve doubled production in the last two years” says Bill. New indirect evaporative cooling products utilising RHE’s high efficiency wheels are in the pipeline but, Bill notes, “we are flat out meeting current demand”.

It looks like we will have to wait a bit to see RHE’s next round of innovation hit the market. 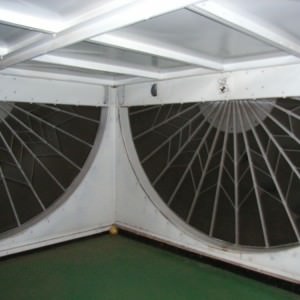