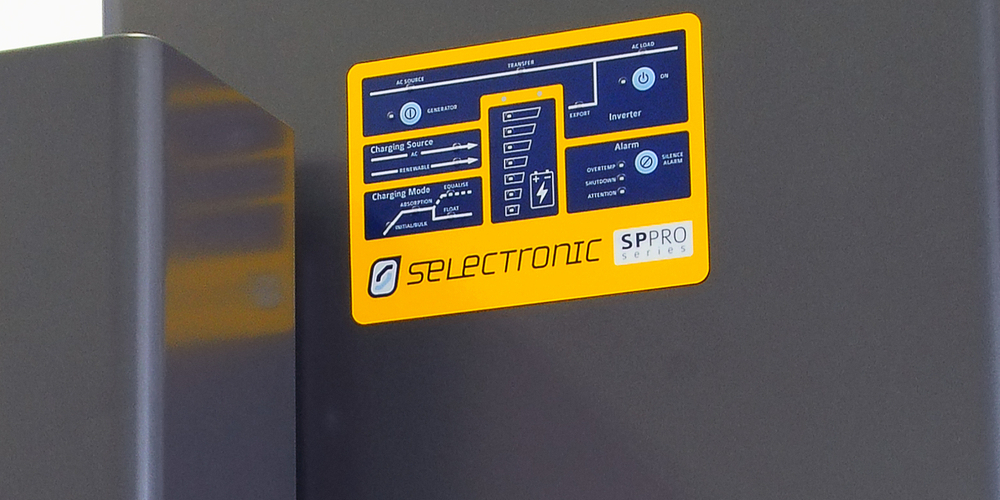 Selectronic Australia manufactures grid-connect inverters that automatically switch to battery backup if there is a power failure. Aside from providing security of power supply, Selectronic’s  products also have the potential to help electricity distributors achieve better management of their networks.

Founded in 1964, Selectronic entered the renewable energy market in 1981 with the release of its first DC to AC inverter. Recognising the need to develop new products, in 2003 Selectronic decided to focus on inverter/chargers that can be used in a variety of situations. One of the main applications is to provide battery backup to grid-connected solar power systems.

With conventional grid-connect solar power systems the inverter automatically shuts off the entire system if grid power fails. This is to ensure the safety of repair crews working in the grid, but it also means that in the absence of grid power the solar panels can’t even supply the home.

Enter the Selectronic SP Plus Energy Centre. In normal circumstances it works just like a grid-connect system. Solar power is converted from DC to AC and supplied to the home with any surplus power being fed into the electricity grid. However, when grid power fails a Selectronic system automatically switches to off-grid mode. The solar panels continue to do their job if there is enough sunlight, and batteries provide additional power if required. When grid power is restored the system automatically switches back to grid-connect mode and the batteries are recharged.

The addition of battery backup does increase the cost of the system. However, many businesses suffer significant losses during blackouts, and in areas where these are common battery backup systems provide greater energy security.

Evening out the bumps

This ability to switch between on and off grid mode suggests a number of other applications. With electricity retailers moving to ‘time of use’ tariffs the system could potentially charge batteries with cheap power from the grid each night, then go ‘off grid’ during the day. The cost of power at peak times can be several times the off-peak rate.

Can’t see the power companies letting you do that? Well, they might – if there is something in it for them. Electricity generators and distributors need to invest large sums of money to make sure they can supply power on those few days a year when demand is at its highest. These are usually hot days when air conditioners are running hard. At other times their investment lies idle. Selectronic is working with the power industry in the area of ‘peak lopping’. This means that your electricity company could automatically buy power from your batteries when they need to meet peak demand, rather than firing up an extra power station. Once demand drops, the batteries would recharge.

Likewise, this ability to draw on extra power when needed could help balance the grid when solar and wind make a significant contribution to our power supply.

A belief in the product

All of company’s senior managers have bought and installed their own solar power systems incorporating the Selectronic product. Lindsay Hart, Sales and Marketing Manager, owns a full off-grid system. The others are all grid-connect systems with battery backup. They are used as test beds for product development and boost the intimate product knowledge of the Selectronic team.

Selectronic’s systems are designed and manufactured in Australia. Lindsay identifies local manufacture as a key selling benefit, along with the fact that support is close at hand. Word of mouth and repeat business are also key sources of sales. At present about 5% of sales are to export markets, and Lindsay hopes to boost this to around 30% in the next two years.

Supporting Selectronic’s growth was the decision to focus on what is essentially one product, albeit one that comes in sizes ranging from 3 kW to 18 kW. Common features and components mean that Selectronic can achieve economies of scale and a boost in employee productivity. This streamlining and focus means the company enjoys higher sales with just 35 employees than it did when it employed 50 people.

Selectronic operates in the business to business market. Lindsay attributes Selectronic’s longevity to its principle of acting responsibly and forming long term partnerships with its customers.

Selectronic’s inverter/battery charger operates in a separate niche to the much higher volume grid-connect solar power market, but Selectronic still experiences ups and downs in the face of frequent government policy changes. About half of Selectronic’s sales come from the imported Kaco line of grid-connect inverters, and Lindsay has observed that when the grid-connect market is running hot, there is a drop in interest in off-grid systems.

What Selectronic would like to see is a level playing field that places a fair price on carbon emissions and an end to subsidies for both fossil fuels and renewables. This, says Lindsay, will avoid the boom and bust cycles that have recently afflicted parts of the renewable market, and will allow everyone to develop long-term plans for their future energy security.